MBBS in Ukraine in MCI approved Medical Colleges and Universities

OUR UNIVERSITIESAPPLY ONLINE
DETAILS OF KROK EXAM IN UKRAINE
Web page Updated on 26.09.2020

6 year's Tuition and Hostel, All Admission related expenses, Consultancy Charges, Visa expenses in India, One-time One way Airfare from New Delhi to Kyiv airport are included in all Omkar Medicom MBBS in Ukraine packages. Only food cost and Insurance are extra.

MBBS in Ukraine in the Best MCI approved Medical Universities

We do Admission in MCI Approved Top Ranking Medical Universities in Ukraine.

MBBS in Ukraine in the Best Medical Colleges

We do Admission in MCI Approved Best Medical Colleges in Ukraine.

MBBS in Ukraine Highlights of 2020 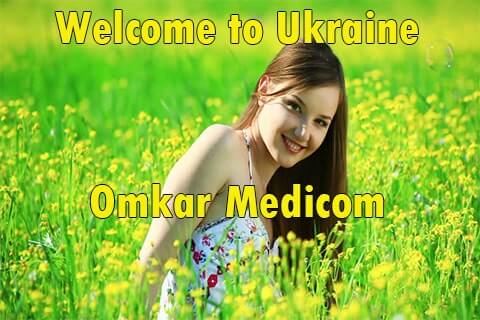 MBBS in Ukraine is quite popular among Indian students for a long time. Most of the Medical Universities in Ukraine are owned and managed by the Government of Ukraine. International students from 40 + countries come to Ukraine to study MBBS in English medium. Some of the best Medical universities of the erstwhile Soviet Union are present in Ukraine. MBBS fee in Ukraine is low compared to the USA, UK, or any other European countries.

All the Medical Universities in Ukraine are approved by:

Many universities in Ukraine have good World Rank around 7000.

Ukraine is the 2nd largest country in Europe after Russia.It was under the rule of Russia when it was a part of the USSR till 1991. The capital of Ukraine is Kyiv. Ukraine is bordered by:

The economy of Ukraine:

The economy of Ukraine mainly depends on the multi-sectoral industry, agriculture, and services. Very recently, the economy of Ukraine grew by about 2% every year after a sharp decline in the previous several years. Donbas or the Donetsk and Luhansk regions, which were the most economically developed regions of Ukraine, are now under the control of the Russian Government. Under the present political situation, the strong economic areas of Ukraine are the Dnieper River area or the Dnipropetrovsk and Zaporizhzhia regions, and the cities of Kyiv, Kharkiv, Odessa, and Lviv.

Ukraine has a continental climate. Winters are freezing cold, and summers are mildly warm and dry. Southern Ukraine is comparatively warm than the North or Eastern parts of Ukraine. The average low temperature in Winter is -8°C, and the average high in summer is +28°C.

The ethnicity of Ukraine:
The major population of Ukraine is Ukrainians (77%) and Russians (17%). Rest are Moldovians, Belarusians, Tatar, and Romanians.

Language of Ukraine:
The main languages of Ukraine are Ukrainian and Russian. A few numbers of people also speak Polish, Yiddish, Belarusian, Romanian or Moldovan, Bulgarian, Turkish, or Hungarian. Russian is spoken and understood by everyone in Ukraine.

Safety in Ukraine:
Most parts of Ukraine are overall safe for Indian students.

Why an Indian student will Study MBBS in Ukraine?

The Central Government of Ukraine is continuously emphasizing the advancement and growth of medical education in the country. The Government is giving financial and other aids to maintain the standard of education. Any MBBS in Ukraine degree holder can work as a doctor in any parts of the world after clearing the respective Licensing exam of that country. International students wish to study MBBS in Ukraine, mainly because of:

These are the few crucial advantages of studying MBBS in Ukraine through Omkar Medicom.

Disadvantages of MBBS In Ukraine

Omkar Medicom will always mention the points of disadvantages of studying in a particular country, which helps our students and parents to take proper decision before taking admission in any country for MBBS.

Eastern part of Ukraine is politically unstable. Several cities of East Ukraine are now under the control of the Russian government.
All the hospitals are not inside the campuses. So students will have to pay bus fare in from 4th year to do some hospital classes.
Rooms are Three-Sharing in hostel with bunk beds and hostels in any university are away from the campus. In some Universities like Kharkiv, it is 14 km far away.
Bathrooms are not attached. However, if any student dislike this, then he/she can rent an apartment outside from 2nd year. Approximate rate is Rs 15,000 p.m.
Cadaver is not provided in Anatomy dissection class as a rule of Ukraine government.
The most important disadvantage of MBBS in Ukraine is the KROK TEST. In 2018, only 19.14% students have passed KROK-1. KROK Result of 2018

Eligibility and Documents required for MBBS in Ukraine

Eligibility to Study MBBS in Ukraine

Please note that students with more age can be admitted but they can be called by the Ukraine Embassy for a Visa interview.

Documents required for Application to MBBS in Ukraine

Please note that we from Omkar Medicom will do all the needful like Translation, Authorization, and Apostille of documents, Visa Application, Invitation, and Admission Letter of the University, etc. Students may have to appear for a Visa Interview at the Ukraine Embassy.